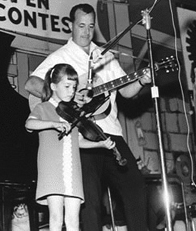 Karen Reed was born and raised in Sudbury, Ontario. A member of the renowned musical Reed family, she began her career at the age of four. Karen studied classical accordion under the tutelage of her Aunt, World Accordion Champion, Iona Reed and learned to play the fiddle from her father, Ron Reed (above).

Musical accomplishments started at an early age and Karen was kept busy with both instruments. At age six, she started competing in Fiddle Contests across the Province and can recall competitions in towns where they are now only memories; Marmora, Spencerville, Merickville, Hensall, Petrolia, and Drayton to name a few.

She and her brothers, Don and Rob, won numerous championships. Don became one of North America's best and Rob earned the title of one of Canada's best under the age of 18. They were later joined by their younger siblings, Kathy and Derek, who captured many awards in their respective categories. The Reed name became widely recognized across the fiddle circuit.

During these years, Karen was privileged to meet King Ganam, Don Messer, and Graham Townsend who visited the family home. She also watched the emergence of others who influenced the fiddling culture such as the Leahy and Schryer families and enjoyed the 'familial ties' that formed as a natural bond between fiddlers.

During her fiddling career, Karen won numerous awards. Some of the highlights include:

Karen maintained the position of being one of Canada's top fiddlers during her years in competition. During the 1990's however, Karen was absent from the 'fiddle circuit' as she pursued personal, educational and career goals. She returned to her roots in the year 2000. 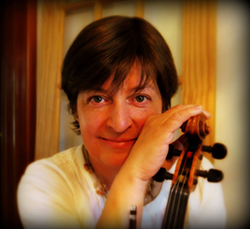 Further to Karen's love of fiddling, her passion extends to the social dynamics that are central to its very essence. This traditional culture brings people together where there is a sense of belonging, community, and family. Her awareness of this social dynamic remains one of Karen's missions when considering fiddling—that it not lose the place from where it originated nor fail to serve its purpose ~ touching people, speaking into their lives, and echoing the voices of those who passed on this tradition throughout the years.

Karen is proud of her Canadian roots and embraces fiddling as a significant part of her heritage. She is now a full time fiddle instructor, performer/entertainer, fiddle competition judge, Director of the Orangeville Fiddle and Step Dance Camp, and is a freelance workshop and camp instructor. Being active in the Canadian ‘sub-culture’ of fiddling is her way of supporting the tradition of fiddling in Canada. It is Karen’s desire that fiddling never lose its soul and all that is authentic to its traditions.